When Black Friday comes, I'll collect everything I'm owed
And before my friends find out I'll be on the road
(Taken from Steely Dan's supreme work, Aja)

I awoke to find the yard full of turkeys. I'd come down stairs first. It's cold to be sleeping in the yard. I was to meet the boys late morning on The Housatonic River and I passed Z Fisher on the road, traveling at about 60 mile per hour (my car, not Steve). He was parked up taking pictures of an icy pond or a graveyard or something of greater value than being on time. Not that we were rushing. This is as informal as fishing days get, which of course they don't, really. To test this we play a game of how long we think we enjoy talking to Torrey in the fly shop before we realize we came here to wade the river and not get deeper into leader tectonics and considerable debt (I spent fifty dollars on nothing whatsoever.)

We've been meeting on Black Friday to fish for trout since back in the early 80s. That's not true, I'm just practicing my veteranese. Other than on Facebook, this is the only day of the year we see Brother Don Jiskra in the flesh. Though I'm not sure we'd admit it, this trip is partially designed to follow our arduous November Steelheading. It's something of a recalibration, putting us back in the mindset of fishing for things that won't leave us ill at ease mentally and that we might even land. It's more akin to fly-fishing and I've found that it helps.

Not that I fished with a bobber. The Salmon River style works for Housatonic trout, it transpires. Chuck it upstream into likely lies, prospecting here and there. I landed 5 nice trout in short order from one of the deeper little channels mid river. Good fish too. Even at a seemingly plentiful 650 CFS the fishy water is obvious on the Housy. Four of the fish took a small, yellow sulfur nymph, which of course shouldn't really happen in November.


Mostly, we get together on Black Friday to eat my wife's cranberry loaf, drink whisky, and most certainly because the rest of America is somewhere else.

No shame in second place

It was bitterly cold today, with a biting wind thrown in for good measure.  We saw what I think must have been at least a couple hundred sandhill cranes.  Sandhill cranes spontaneously generate, at least here where I live, only in bad weather.  They must spend the nicer days as spores in a state of suspended animation, because I have never seen a sandhill crane on a nice day.  Still, it's worth it to venture outside to see them.  Sometimes they're very, very high in the sky, but usually, they're much, much higher than that.  The most fabulous sound in the world is that made by a Common Loon on a remote lake in the North Woods, but the sound that sandhill cranes make during their fall migration is probably a very respectable second place. 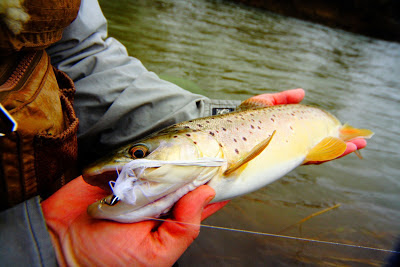 It’s shortly after 5:00 am, and I am watching the butter on my toast slowly melt. It trickles down into the varied crevices in the toast, taking an unpredictable path in the hopes, I suppose, that it will eventually reach the other side.  The parallel to my own life isn’t lost on me.

I finish the toast, load the car, and I’m on the road just as the sun rises and casts a butter-yellow burst across the sky.  I don my waders and walk the short path to the river, pausing momentarily to take it all in.  Flowers, buttercups mostly, dot the forest.  Mist rises off the water the way steam rises off of a hot, buttery biscuit.  As I start down the bank, my feet slip in the mud, as if I’m walking on melted butter.  I catch myself, only to hook my toe on a root, and I land face down, the way a piece of toast always lands butter-side down.

I collect myself, tie on a fly (a white and yellow cone-head wooly bugger commonly known as the “Bread and Butter”), and begin casting.  Soon, I’m in a routine, my mind wandering through various thoughts the way a pat of butter slides over the surface of a hot skillet.  I feel the line stop, but not suddenly; instead, there is slight resistance at first, and then more – the way your knife cuts through thawing butter, only to reach the still-frozen core.  Only then do I realize I have a fish on – a large fish – which takes off upriver, my fly line cutting the water’s surface like a hot knife through butter.

I take up the slack, and begin pumping the rod like a milkmaid churning butter. The fish rolls and it’s an enormous brown trout with flanks the color of butter.  But I apply too much pressure and the leader parts.  There is a bitter taste in my mouth, like the taste of burnt butter – the taste of defeat.  But I’m out of time and the sun, now high, has awakened the meadow. There are butterflies everywhere.  I’ve promised my wife that I will insulate the attic today, which seems only fitting.

I am haunted by butter.

[Editor's Note:  A little explanation is probably in order.  But you're not going to get it.]
Posted by T.J. Brayshaw at 8:14 PM 1 comment:

The morning burned golden on the mountain in the sky.  In the semi-polarized light, Angus saw the wake and the fish rolled.  His line never tightened, but he saw the broad tail.  At that moment, his cerebral cortex said “Aww, fuck it” and his amygdala began the slow but deliberate process of taking over Angus’s brain case.

At first, it was just the fish.  Then it was the fish on that fly.  Soon, Angus could envision the cast, the mends, the take – and he became unable to distinguish his daydreams from his ability to predict the future.  Once, when a different fish took the fly and broke him off, he became despondent.  He beat his wife Sarah senseless, went on a three-day bender, and then decided it wasn’t possible for his fish to break him off.  The very fact that the fish broke him off became proof that it wasn’t his fish.  Angus was a true believer.

On the twenty-third day of the seventh month of the second year that he pursued this peculiar form of perfection, Angus needed money.  Although he hadn’t slept for several days, it was dark and there really was no excuse for the long piece of iron rebar that jutted into the parking space at the Quik-E-Mart. As Angus pulled into the space, the rebar punctured the already rusted floor of his car, just missing his balls.  He pulled the rebar from the car, and entered the store.  There, he explained what had happened.

The night manager, a pock-marked, pot-bellied greasy man, looked at Angus side-ways and replied “Listen.  I could use you to go fuck your…” but before he could finish, Angus’s cerebellum, now a servant to his increasingly reptilian brain, had instructed Angus to execute a perfect Single-Spey with the 7 foot piece of rebar, and this struck the night manager in the temple, killing him instantly.  Angus reached across the counter and began pulling money from the register.

In a back room, the cashier and the ice-delivery kid shared a joint. It took a moment for the cashier to process what he had seen on the closed-circuit television, but when he had, he grabbed the ice kid by the sleeve and together they entered the store and approached Angus.  At this point, Angus turned and this put the approaching men “river right”, so to speak, and the first motion of his Double-Spey caught the ice kid across the forehead, ending his ice-delivering days abruptly.  The second motion of the cast took off the cashier’s nose, which hit the glass door of the beer cooler and slowly slid to the floor.

Angus did not return home the night of the speying, nor the next, nor any other night after that.  Sarah found his fishing diary, the one labeled “VI”, but could make no sense of it.  Each day had an entry, but every entry was the same and contained just numbers separated by forward slashes: “Oct. 5: 6,788/10,456/1/0.”  It was only later, after Sarah had found the journal labeled “III” that she realized the first number was "casts", the second "mends", the third was "fished moved", and the last referred to the takes.  This number was always zero, because Angus didn’t count takes that came from other fish.

When the authorities caught up with him, he was standing in the same spot where he had stood virtually every day for the last three years.  They watched him from high on the canyon rim, two through binoculars and one through the scope of a Remington 700 PSS in .308 caliber.  They watched him make the same cast, over and over, and marveled at how, each time, the fly line landed in the same place.  Of course, that wasn’t entirely true because on occasion, much to his disgust, Angus did not make the same cast or the same mends.  But only he knew this because to anybody else, they were perfect replicates.  Even if somebody had seen all of them- all 9,936,506 of them – they’d have never noticed which ones were wrong.

The captain shouted at Angus to drop his fishing pole and freeze, but at that instant the line went tight so naturally, Angus set the hook.  To the captain, it appeared as if Angus were drawing a weapon, so he whispered to the sniper to “Take him”, and a loud crack split the air and echoed through the canyon.  Angus’s feet slipped from beneath him and he slid into the water.  The captain congratulated the deputy on a nice shot, but the deputy replied “I never pulled the trigger.”  Across the water, the lawmen saw a giant fish leap, the fly and broken leader clearly visible in the fish’s huge mouth.

High up in the trees, two jays are scolding a third, who is down by the river, picking at a piece of Gore-tex stuck in the river rocks.  A dipper leaps from his wet perch into the river.  The fading light reflects off of the water like the embers of a dying fire, and a heron wades the shallows quietly as night falls.


[This piece was published in a slightly different form in the Spring 2013 issue of "The Drake" magazine.  Thanks to Tom Bie and "The Drake" for putting it out there.]
Posted by T.J. Brayshaw at 9:19 PM 4 comments: