On The Painted Stream

I received this today from Colin McDougal, my oldest fishing chum. He fishes the Tweed often, as we had done since we were early teens, and recently had the pleasure of being led down the famous Dish in just the manner described below.

The Gateheugh stream lies at the top of Bemersyde on Tweed beside a dramatic cliffy northern bank where oaks jut horizontally out from the precipice. On the south side on Ravenswood a sweet alluvial haugh lies green between riverside trees and a rising bank of hardwoods. In November, when I fished it, both banks showed swathes of golden, yellow and brown foliage. The Gateheugh is probably the most painted stretch of water in Scotland, perhaps in the entire salmon world, having been painted as well as fished for the past fifty years or more by Lord Haig, the laird. Being on canvas is not the only distinction of this two-hundred yard stretch of purling stream. It is one of these memorable Tweed salmon reaches which promises excellent fly fishing if you can overcome certain difficulties. Let me explain. When I first fished the Gateheugh in the seventies, the tradition was to wade the stream and cast a long line towards the Ravenswood bank, searching out pockets and lies in the fast water. To hang the fly well over the lies, you have to get well out and it is a treacherous, waist deep, fast wade, liable to give you a ducking without much warning. The temptation to wade to the limit on Gateheugh is heightened, because there is a set of lies called the Dish where boulders and ledges shape superb salmon lies under glassy windows in the fast water. Below that a long stream runs past the Copper Beech, finally losing itself in the shingle above a grassy island. You can be very isolated, wading well out into the stream while swinging your fly on a long line over the Dish. I have hooked autumn salmon here in the past and in the fight they have run full circles round me before I could get back to the shallow water under the Bemersyde cliff and manage to net them. Lord Haig says that a medal should be struck for all those who wade the Gateheugh and land a fish without falling in. 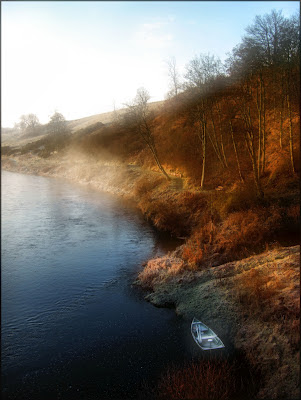 I was invited back to fish Bemersyde for a late November day and, for the first time I found I did not need to wade the painted stream. I was floated down it. Ian Farr, the Bemersyde keeper, tackles the difficulty of the Gateheugh in a bizarre way. He has a light aluminium, oarless boat in which he seats the angler, bow downstream, and, wading deeply Ian clings to the stern and holds the boat, moving it down strategically to cover the superb lies of he Dish and the Copper Beech run. Have you ever fished from a boat where the boatman was overboard, up to his chest in fast flowing water? The Tweed was high and at one or two places, Ian calmly announced that we would drift the boat over deeper water until his feet could touch bottom again. So, he tip-toed and floated, clamped to the boat with his elbows over the stern board. Then his feet would find bottom again, and the boat would stop and I would shorten line and cover a new arc of salmon lies, then progressively lengthening it I would let my tube fly tour slowly through the likely places and dangle between the underwater boulders. It is gripping fly fishing; you expect a pull from a salmon every yard of the way. Fishing down the Gateheugh like this is one of the most unusual examples of close co-operation between boatman and fisher. It can also be highly productive. It is a particular tactic of this stream and it is full of the special atmosphere of fishing this lovely reach of middle Tweed. I know of nothing quite like this elsewhere on the river, nor indeed, anywhere else in Scotland.

It is only half a joke when the Bemersyde boatmen tells his rods not to hook fish over fifteen pounds on the Gateheugh. As if you could select takes! We floated down and the fly searched the water. I began to think the day was against us, because the Dish, with its lovely ridges, columns of sand and shingle and seductive glassy areas produced nothing for the first half hour. We talked however as I fished. We talked about the high, cliffy Bemersyde bank. I was once fishing there, years ago, in February when two massive red rocks suddenly detached themselves and roared down the slope through the trees and raised a huge plume of water as they fell into the river. Ian told the hair-raising story of rescuing a German tourist after a long search. The German had tried to glissade down the cliff, had fallen a long way and was found after many hours of searching in the dark lying unconscious on the branches of a tree. They took him down to the Gateheugh where Ian, fully clad, waded and floated him in the boat through the whole Gateheugh to the Ravenswood side where a helicopter took him off to the hospital. Ian was given a public commendation for that rescue. We were silent for a while after that story. I watched the spey cast rolling out and the copper tube plopping into the water. The fly swung perfectly over the lies. We both said at once that it was incredible that, in these perfect conditions we had not had a pull from a salmon. 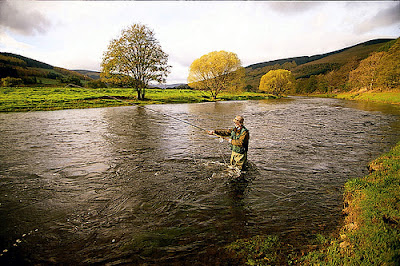 As if on cue, it happened. The pull came and the reel spoke and for a minute or two the fish was quiet. We said, sagely, This is a good fish, maybe fourteen pounds. Then in a slash, a big tail came up. We had a momentary glimpse of a high silvery back. Sixteen pounds at least, I said. Ten minutes passed, punctuated by two or three longish runs and some heavy tugging. I couldn't do much with the fish at all, except hang on. What a grip of the Tweed this fish had ! It seemed to be able to use the whole weight of the Gateheugh stream to run down and across at will. The salmon would come half way towards the boat then would tear off and take up a dour lie behind a big sunk stone. It might be bigger than we think, one of us said. The time went on. Twenty minutes passed and we hadn't really seen the fish clearly. Then we had our first real sight of the salmon as it arched over near the boat,- a very deep fish, a small head and a big tail, bright from the North Sea. In November that is magic. Ian said that he had not had a fish like this on the end of anybodys line for over a fortnight. So there we were, well out in the middle of the fast stream, toiling, with a heavy fish pulling the fishers arms off and the gillie holding the little boat hard by the stern.

We thought the time had come to try to net the fish . In a well rehearsed move, Ian turned the boat and anchored it from the bow with a great twenty eight pound weight, which no doubt had once measured out stones of potatoes on the farm. He took up a position below the boat, waist deep, waiting with the net. But twenty minutes or not, we were too soon. I brought the fish in possibly ten times and each time the fish turned scoffing at the pressure and, using the great weigh of the Tweed took line and ran back to the main stream again making the reel sing.

This would not do. We had to take the boat in. This Ian did and once in under the trees, the boat was anchored again. Now the fish was drawn in to gentler water and at the third attempt, with high anxiety prevailing, I managed to get the fish in behind the boat in shallow clear water where the trees shaded the stream and let us see better what we were doing. Every minute that elapsed raised our anxiety. There, in the shallow water, where trees shaded the Tweed, we were able to see for the first time just what I had hooked. It was a magnificent, heavy fish, shining silver, and very deep in the flank. It filled the net. No wonder we had had to work hard with it for half an hour. It wasn't a record or anything like that; it was twenty one pounds, really magnificent, the essence of power, with an impressive head and a massive tail. 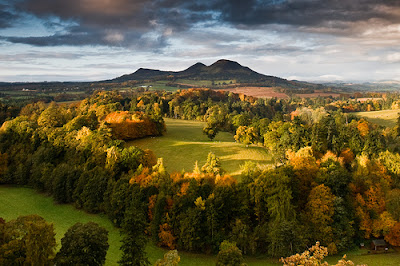 It was the only fish of the day off Bemersyde and it was a remarkable sample of what the Tweed can produce in November, when almost every other river in Scotland is closed. The remarkable late Tweed run contains some magnificent fish, and in the circumstances in which we landed this one, we felt that we had shared in that legend. The Gateheugh, with its lovely Dish and its alluring Copper Beech run had shown its quality and its difficulty at the same time. A memorable joint effort. I was glad, however, not to have to carry the fish along the difficult path to the boathouse. Ian did that. I was doubly glad that I did not have to carry it up the steep path, Coronary Brae, from the Boat Pool to Bemersyde itself. It was dark when we got to the house, but one window to the back was lit. Looking up at that lit window, as if on a cinema screen we saw Lord Haig in his studio high above us, standing in front of an easel, painting. Was he painting another study of the spectacular Gateheugh ? I had a deep sense of completeness just thinking that this was the case, a warm and rounded thought. I left my salmon for the artist. What I carried away was less tangible, the experience of a battle with a considerable fish, - a picture, as it were, from the other side of the canvas of that memorable painted stream.