Messing about in boats 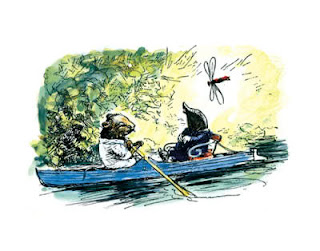 "Believe me, my young friend, there is nothing - absolutely nothing - half so much worth doing as simply messing about in boats."
(Rat to Mole, from Grahame's "The Wind in the Willows")
I am supposed to be writing "How to" (and "When to" and "Where to") articles, but I've gotten side-tracked with stories, "How (not) to" articles, and other such crap.  My apologies.  Here's a "How to"...
Several years ago I was living in California, and regularly fishing harbors from rental boats.  This got too expensive, so I started fishing from a pontoon. A pontoon is great, in many ways, but it has some drawbacks as well.  For starters, one sits low in the water.  Personally, I don't care for this because it limits my visibility, but even more because I really prefer to stand up when casting or landing fish.  There's also a limit to how much one can carry along, and pontoons aren't terribly efficient to row, either. However, my own motivation for finding alternative watercraft was that I didn't fancy a 500 pound sea lion in my lap, and I'd come too close to realizing this possibility on several occasions. A kayak was simply out of the question (they're yellow).
Very small (usually 8 feet long) flat-fronted boats, called prams, have a long history among fly fishermen.  These little boats are light enough to be loaded onto a car roof and to be carried (or wheeled) to the water, but large enough that you can toss all manner of shit into them.  And being of wide beam (usually about three feet), they are stable enough to stand in safely.  These features made them particularly popular among the salmon, steelhead and striper anglers of California.
The old prams were often wooden, then later aluminum, and now many commercially available ones are made of fiberglass and other modern lightweight materials. But these were beyond my reach, financially, at the time so a friend of mine suggested I build one.  Keith is, literally, a rocket scientist and when a rocket scientist says "It'll be easy", it's not entirely clear how you're to respond.  But he explained how it can be done, I became intrigued, and decided to give it a whirl.
I chose to use a method known as "stitch-and-glue".  Stitch-and-glue is simple in principle and in practice.  One cuts plywood panels according to established measurements, and these panels are then stitched together using wire or, in many cases, those tough little nylon electrician's cable ties. Then, fiberglass tape and an epoxy/sawdust mix are used to join, or "glue", the adjoining plywood panels.  Ultimately, these joints are smoothed and then the entire boat is covered in special epoxy, which waterproofs it.  I built mine in about five weeks, working mostly just on weekends.

I've since fished the boat on both the Pacific and Atlantic coasts, as well as in a number of rivers, reservoirs and ponds.
When I started to build this boat, my motivations were entirely practical. In the end, however, I loved the building process more than I could have imagined.  There is a satisfaction that comes from using things one has made oneself, and if you tie your own flies or build your own rods, you certainly know this.  I do both, but the satisfaction I get from those things pales in comparison to that I get from fishing from this boat.