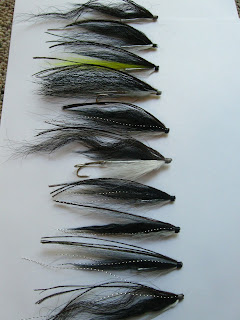 Like me, my oldest fishing friend Colin has just turned 40. He continues to target Atlantic Salmon in Scotland, while my move to New England took me away from such pleasures and towards a new affair with saltwater stripers. Since I recently took up fly tying, I said I'd attempt some salmon flies as a birthday gift, and I wanted to tie the very simple Sunray Shadow, or the "moustache" as we call it - a killer top water salmon fly. Flies like this - the Collie Dog being the most famous - are quite long and undulate in the water as they're stripped in short pulls across the surface. I've fished seemingly dead salmon pools and had fish on every other cast slam this fly. Converting takes to hooked fish is another story, but the Sunray certainly causes a stir.

I didn't have the Kashmir goat hair required of the original, but I had some nice goat wool, yak hair, bucktail, and some Bison, the latter donated by Andrew from his chum Steve Rinella (a piece from the very buffalo of his book, American Buffalo - In Search of a Lost Icon.) I tied the flies with variations of these materials. It took me some weeks to source the other materials - the small bore aluminum tube and the rubber hook inserts where finally located in the excellent hardware store in Old Saybrook, CT.

They might just work, and I'll report if and when Colin manages to hook a salmon with one. Obviously I'm hopeful that an Alaskan buffalo proves the downfall of a Scottish Atlantic Salmon.

Close up - the brown buffalo hair (middle) has an eel-like waviness that I like. 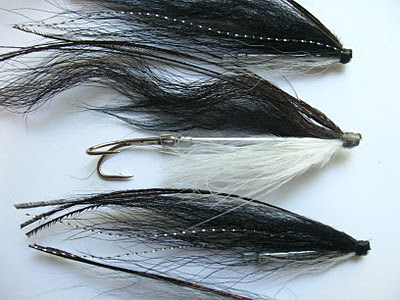 Posted by English Jonny at 1:10 PM No comments: 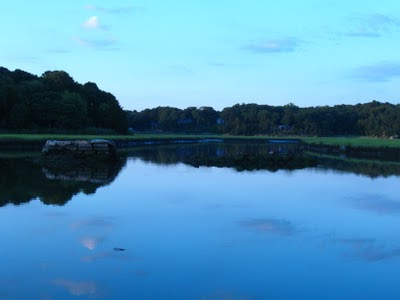 Last August I visited a local spot on the Sound and happened upon several decent stripers - it was a warm afternoon and I recall throwing a black Clouser on an intermediate line up current and "nymphing" it back to me. It's the Dog Days again and although I know chances aren't good, I'm compelled to go and see. Better anglers time their visits to coincide with more productive times, but predicting patterns in movement of bait and predators, tides and climate, is fine on paper. The reality is I get curious and need to take a peek. I'm lucky being 5 minutes drive from some water. I'm also cultivating an impressive collection of cigar tubes and sand in my car - more motivation to go fishing.

The culvert had begun to dispense the outgoing tide. An obvious rip formed in the shallows of the bay, moving water in contradicting eddies. There was bait everywhere - the tell-tale signs of blue crabs paddling in the surface film (do they know what they're doing or are they helpless to the current?); tiny silversides in singles and very occasionally bursting in numbers; and something else, either tight schools of bait or bigger animals cruising the flat water in noticeable V formation.  Perhaps they are shad, or the bunker that we tried so hard to catch last year. They say shad are easy to catch - perhaps when they prove difficult they are bunker!

I spent an hour fishing a floating line and a Big Eelie fly; nothing scientific, just the first to hand. For better or worse, having lost my beloved 10' 7 weight last year to a car door, I may be getting more proficient with the 9' 9 weight, seemingly the industry standard. At any rate, last night I was pleased to be able to double haul the whole line *quite effortlessly with only 2 or 3 back-casts (*fake, windless conditions).

Casting was the highlight tonight. I knew I'd catch nothing, so I was on the money, the pattern verified. Osprey, night heron, blue heron, and all manner of LBJs were around at dusk. Thankfully they were the only creatures to see me run for the sanctity of my air conditioned vehicle after only an hour, drenched through.