These fish hold a sort of revered mysticism round our way. The man we call Bob once slept in his car just to be in the right place to land his first one. Todd and I braved rough seas just to be within a quarter mile of them, but they wouldn't stay wherever we paddled. For those of us without a proper boat, albies aren't really a staple of the calender, so we tend to forget about them.

Tommy and I heard the jungle reports on the same evening and plans were made to drive to RI for a look. Two rods would be needed - heavy fly rods and spinning gear.  Strong wind was blowing into faces, but I started with the fly rod and within 10 minutes of our arrival a pod of albies suddenly appeared in front of me at the exact same moment adrenalin combined with a fumbling fit to override any prior understanding I may have had about the basic workings of a fly cast. I've never had stage fright in front of a fish before.

Four of us fished in line for the next 4 hours, blind casting some but mostly waiting and watching, trying to be poised and ready for the next frenzied pod to break the surface. It was good to have more eyes on the water, and we settled into an informal pattern of chatter, casting or eating - always with one or two heads keeping sentinel. Four or five pods visited us over a similar number of hours. I entirely fluffed my lines a second time (this time seemingly forgetting that I'd switched from fly rod to Deadly Dick; the resultant shot into the frothing blitz was laughably inadequate), but listen here: this shit ain't easy. You have about 10 seconds in total to perform many synchronous tasks:

1. Train your eyes on the school of fish. Try to predict their direction of travel;
2. Train your hands and brain to retrieve your previous cast (which invariably is inconveniently located nowhere near where the fish have appeared);
3. Ensure that all manner of things that want to go wrong have gone perfectly right (no weed on your fly, fly line free of all tangles, no-one walking behind you?)
4. Flip bail arm/start false casting;
5. Start winding/stripping double handed, very quickly;
5a. Do all of this twice (impossible with a fly rod);
6. You're at 20 seconds, the fish are long gone and you feel mugged. For some unfathomable reason, you now believe that this is a wonderful experience and you promise yourself you'll be super ready for the next school.
7. You light a cigar and watch the ocean.

One of our four - a nice fellow who calls himself Flyfish4tuna on Flyaddict - hooked a fish, and instead of fishing to the same pod, I picked up the camera so that you, dear readers, could share the joy. The photographs don't convey the sound of the drag, but I heard it and that's why I'm dribbling, and this from a relatively small albie. 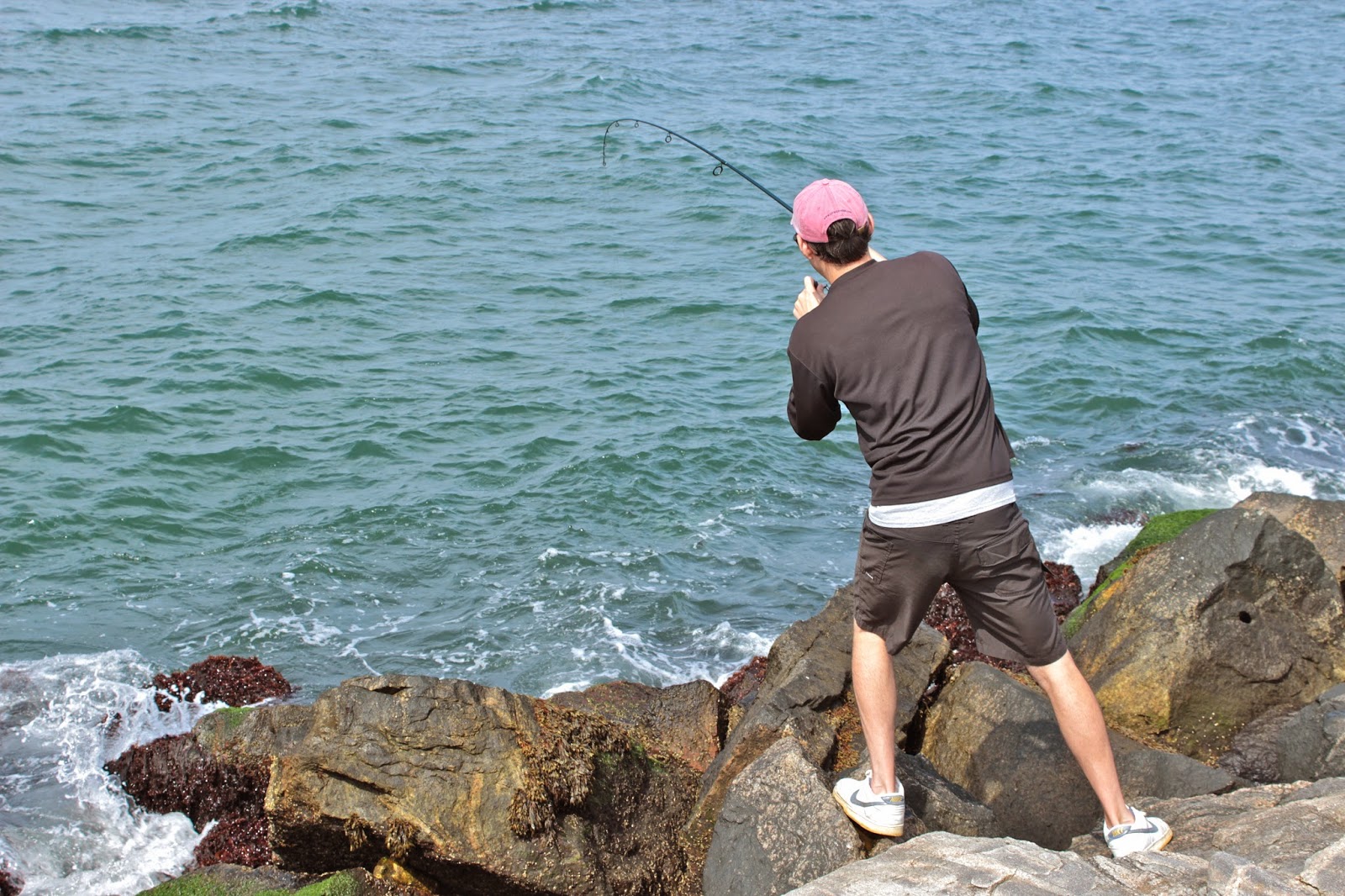 His line picked up another along the jetty and the fish is now trailing more lead and hooks, but he finally brings it along side, and we realize that one of us has to clamber over car-sized boulders to get it. I am the photographer, so not me. Mr. Tuna's friend has had one fall already today; it won't be him. The pictures don't begin to explain how unpalatable the scenario was, but Tommy was an Eagle Scout, so we'll leave it to him. 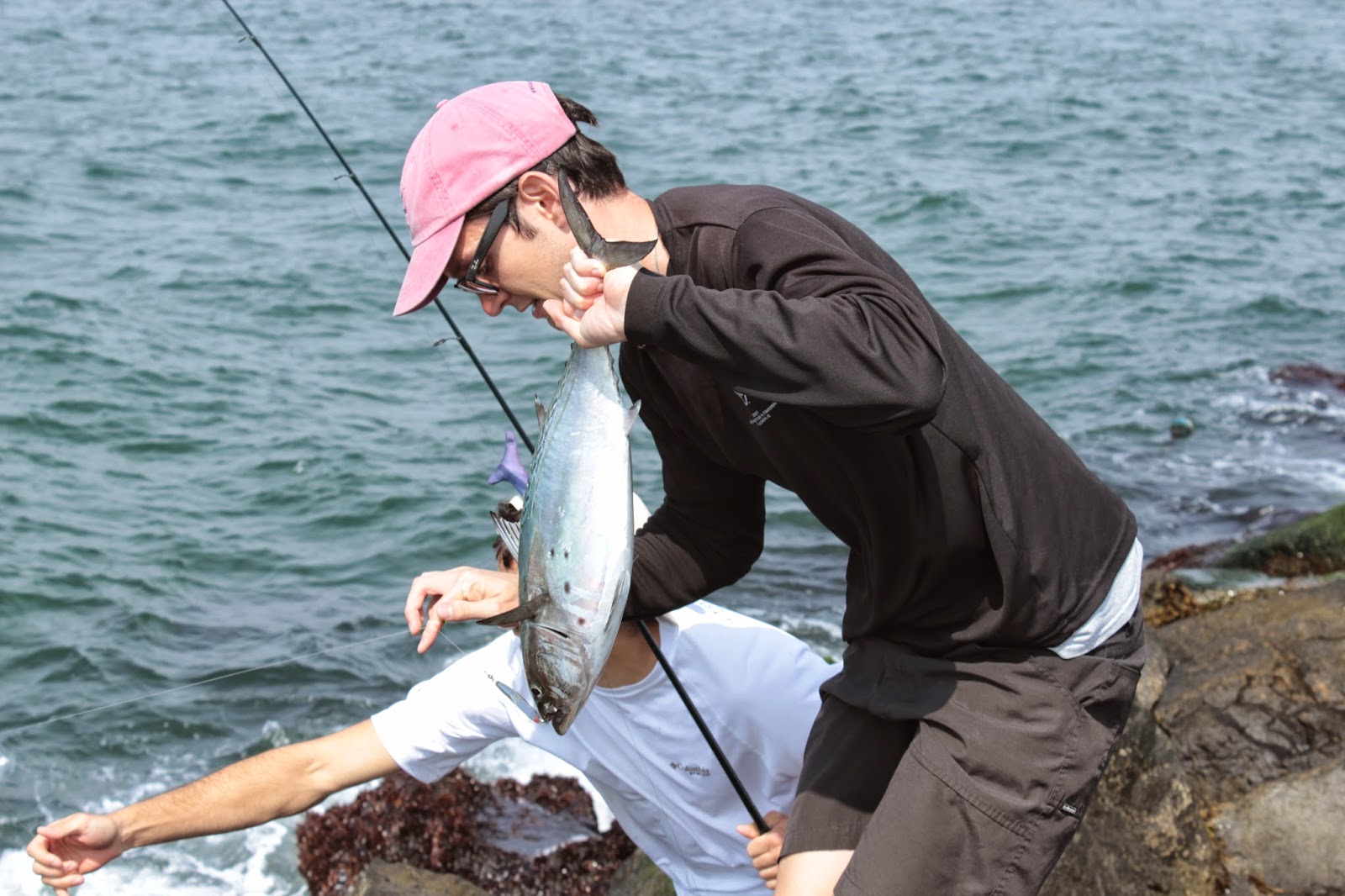 Just what I need; another horribly addictive fish.