Hugh Falkus was like the Don when I was learning to fly fish. In one of his films, he meets up with the actor Michael Hordern (the voice of Paddington Bear) to fish for sea-trout in North-West England. In one palpable scene they sit patiently to wait for the sun to leave the water, to be ready for darkness and the "magic time" when these trout start to move. You can almost feel their impatience to cast, but they hold back.

It was dead when I arrived at the salt marsh last night. The tide was well on its way out and at eight-thirty o' the clock the sun was still on the water. It was light late last night. And I knew it was dead within a minute, because this is the kind of skinny water where catchable fish show themselves, often in numbers, slashing and gulping bait at the outflow channel. I made some practice casts to no fish, which were most obliging, then walked inland to a secondary funnel to see if no fish were there too. You know the places. There are a thousand along the CT coast - bridges that compress water and bait. Striper hang-outs, basically.

The water was glass calm, but I made some more casts because I was there. It was mildly educational to recalibrate the length of my casts to the fly-catching Fragmites on the far bank; the plus side to the bright gloaming. But these are the excuses we make when we know we're wasting time, and I perched myself on a rock at water's edge, smoked a cigar and pretended I was having the most fun listening to the spring evening, watching the moon rise, and sending insulting texts to my house-bound friends. Too lazy to haul myself home, is the truth.

The first bait-inhaling pop of a striper no more than 15 feet away confirmed my angling genius for cleverly biding my time. Where there had been nothing, in the next five minutes every bass in the neighborhood joined the feast and I moved into position to do some proper fishing. A 16"er on my first cast was followed by a 25" and a few more smaller fish, all by dapping 10' of fly line to a floating shrimp. No monsters, but it's all relative in skinny water. I caught or hooked most of the rises I covered, settling down after each fish to rest the water and await the next customer. It's rarely as predictable at this spot, and sometimes the bass are fussy to the point of refusal, but last night they ate, my patience rewarded.

Walking out through the mud I thought of the Falkus film and the way it should be done, and how it means more to me to be fortunate than to be right.

The film that stirred the memory is worth a look, if you haven't already.
http://www.youtube.com/watch?v=XNiAshQiAG4

I know how this is going to end

A few days ago, I installed three ceiling fans in my home, and two of them worked. Well, it really doesn't get better than that and only a damn fool would squander good mojo, so I went fishing. The white bass are in and it's probably been almost 30 years since I last fished for them. They are as they should be, which is to say that as the first fish to really "turn on" in the spring, they can be absurdly easy pickings. I think were they to be this easy to catch and also come along later in the season, we'd ignore them. But this sort of fishing is what one needs after a particularly long and painful winter. The problem is, after you've caught 37 without moving your feet, you start to say to yourself "I know how this is going to end." So you start to play games: I'll see if there are any in the really fast water. Are they in the shallow water? Will they take a fly stripped really quickly? Dead-drifted? Swung? It becomes clear the answer is always going to be "Yes"; spring has arrived. 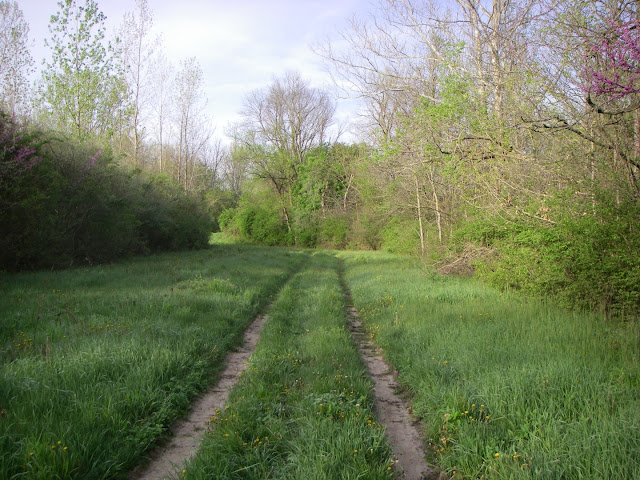 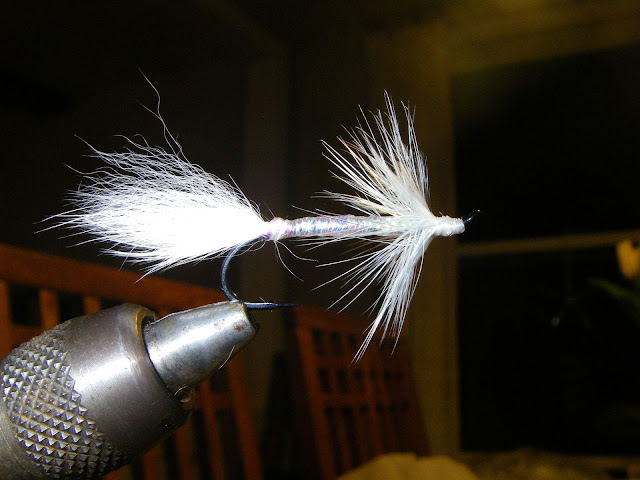 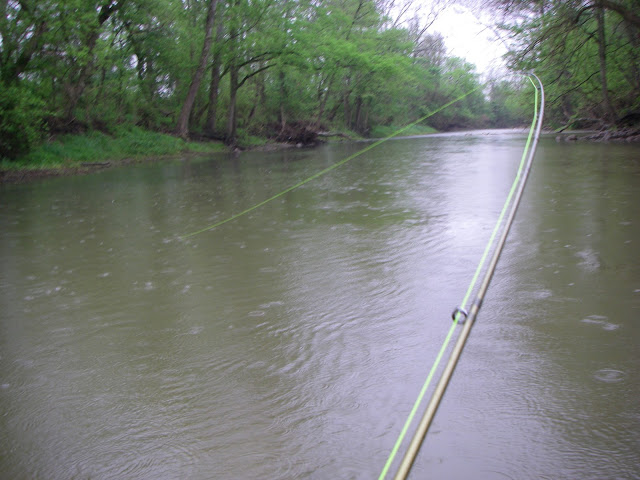 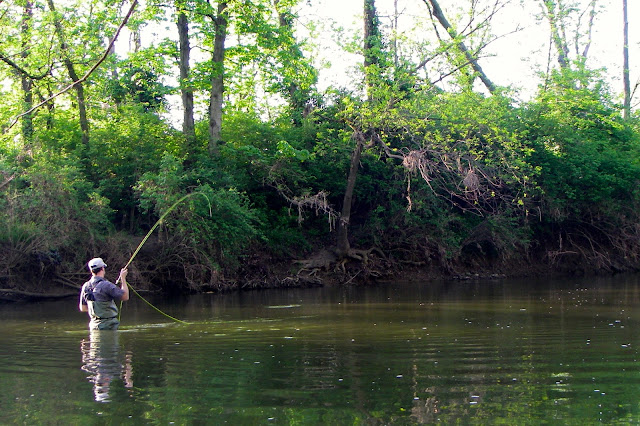 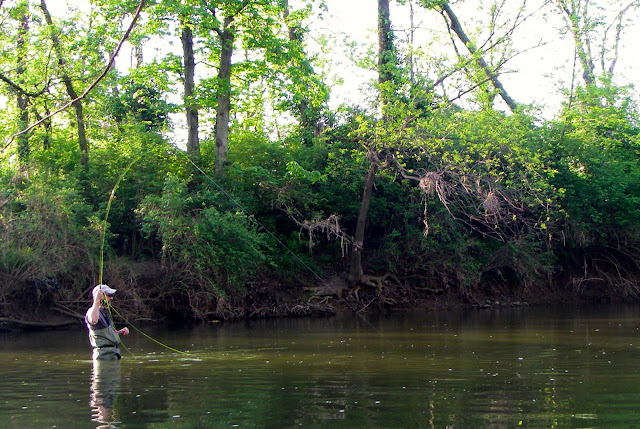 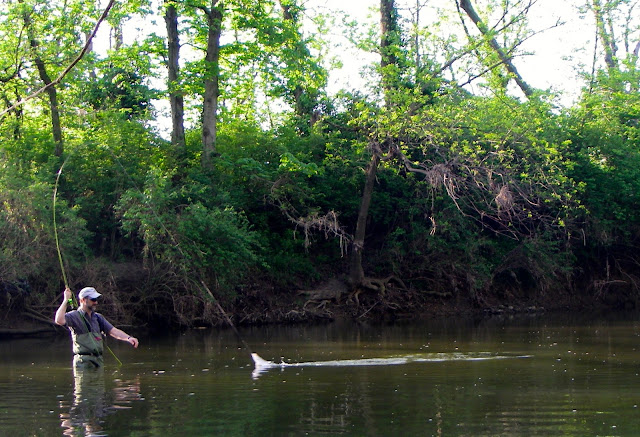 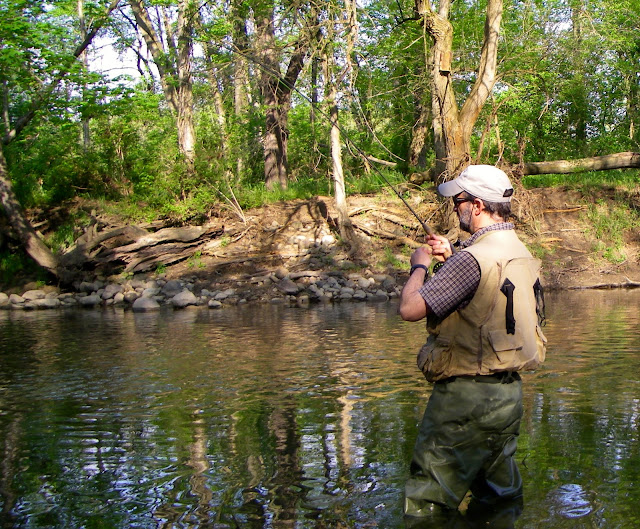 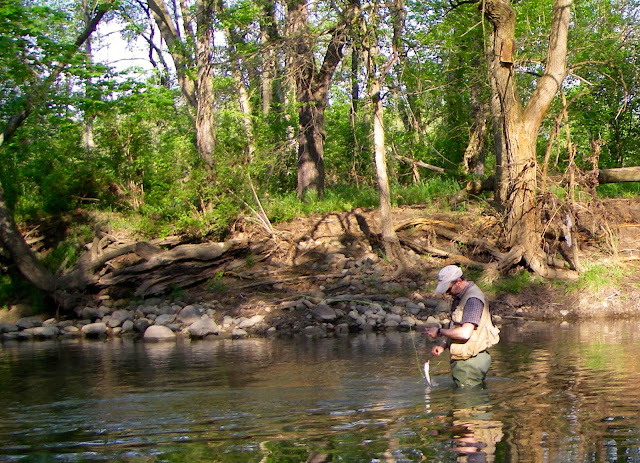 I found myself fortuitously near to the Farmington River today. Todd joined me and we alternated between nymphing rods and dry fly. After a few fish between us, at 2.30pm The Fabled Hendrickson Hatch was just building in intensity when I decided it was time to call home; to inform Wife that I would be late in; that my cell phone battery was almost out of power; but no need to worry, don't wait up.

You know where I am.

I turned around midstream to wade ashore and make the bank-side call. That's when I fell, head-long, into the cold Farmington River. I struggled to regain my footing, and fell in, again head-long.  Swimming, basically.

On the bank I made sure nothing was broken - rod first, then bones. It felt good to be wet through in the sunshine, and to know that, on any given day, I'm utterly rubbish at fishing. I laughed about that all the way back to my car.

The phone was dead, and I'd be home early, after all.