Brief Scenes from the Culvert

No time to write. Busy with work, the family and trying in vain to find early season stripers. It's probably too early, but there's bounty somewhere. Anyway; some photos of recent things.

What's skinny, hollow, and prone to poke you in the eye? The grass is Phragmites sp.

Near death for a Mummichog or Killifish. The pool they were in looked 2" deep, but quick sand is no laughing matter.

Urban fly fishing.It wasn't what you'd call pleasant under there, but the water was awfully fishy looking... 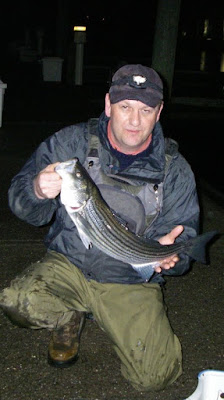 How not to hold a bass, this one from the River Thames, which I have trouble pronouncing. 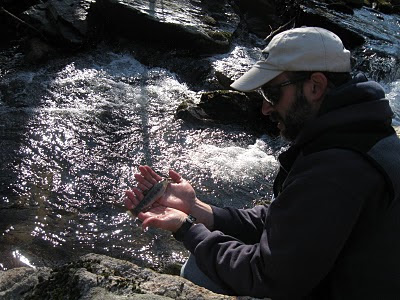 Andrew about to eat lunch. As a striper guy, when he struck this fish it flew over his right shoulder. The last time he caught a brookie he was a lot younger.
Posted by English Jonny at 8:31 PM No comments:

It's not a gun. And it's not the crocus - they're erratic and prone to jump the clock. Forsythia will do it, but they're not here yet. Not snowdrops; too early to rise. No, I agree with my friend Steve. It's the small ultra-sound 'peep' coming from the woods around my house. A tiny signal from a small frog. I heard it just now in the gloaming. A small peep and a big smile.

It's the start of the striper season and I'm going fishing.

Tight lines to all.

Angler and biologist T.J. Brayshaw wrote this excellent essay. If you can get past his predilection for bathing in herring, the message is a very sobering one. --EJ
I’ve been thinking about anadromy. How is it that a fish can spend months or years in freshwater, then more months or years in saltwater, only to then return again to freshwater? Biologically-speaking, this is fascinating when one considers the challenges of regulating water-balance that such a transition presents. But lately, as I stare at the river by my house, wondering if the fish have returned, I’m not thinking about osmoregulation. I’m thinking about cycles. We humans seem to be fascinated by cycles. It’s in our souls, in our bones, it would seem, and probably for good reasons. From before we could have even been called human, we have relied on some understanding of cycles for our very survival: cycles of the seasons, the moons, and the plants and animals. Maybe this is why, even for modern humans, the cycles of anadromous fish fascinate us so. My initial thought was that perhaps the fascination comes from the mystery – where do they go when they aren’t here? But we now know the answer to that question for many of the species that still captivate us; the salmon, the steelhead, the striped bass, even the eel. And yet, the fascination continues.
In the recent, and fabulous, documentary film “Rivers of a ”, steelheader Lani Waller is discussing his fascination with steelhead. Steelhead are amazing fish any number of reasons, of course, but Waller explains that for him, part of the wonder lies in being part of a cycle “that has been going on for a hundred thousand years.” The wonder in his voice, as he explains this, cannot really be captured on paper. But what is clear is that what he speaks of with such reverence is not simply the steelhead, but the cycle.


I have never fished for steelhead, and my exposure to the Pacific salmon is limited to one summer spent working in . But I was fortunate enough to see bright red sockeye salmon filling a small stream from bank to bank. These fish could not be induced to take, at least not by me, so I focused my angling efforts on the rainbow trout that forever followed the spawning sockeye. And while I fished for the trout, I watched the salmon. I watched them come up the river, I watched them spawn, and then weeks later I watched as they died. A spawned out salmon is a pitiful sight to the unappreciative eye. The fish do not simply spawn and then go belly up; instead, they waste away, covered by festering wounds and fungus, flesh hanging in ribbon-like tendrils. One feels the urge to save them, but knowing that is impossible, to perhaps whack them on the head - anything to end the misery. And the death does, indeed, strike one as terribly wasteful. But of course, this is an absurdly human notion, and deeply ironic as well when one considers what wasteful creatures we really are.
If we can, instead, abandon that perspective and focus on the cycle before us, we will hopefully appreciate that whether we’re considering the semelparous Pacific salmon, or the interparous striped bass, what we’re seeing is something much greater than ourselves. And because it is, it is so much more heart-breaking to consider what we have already done to these timeless cycles in some places and appear to continue to do in others. In , the Pacific salmon are, literally, at risk of extinction. On the east coast, where I fish, the Atlantic salmon is, for all intents and purposes, gone. And we have seen the striped bass go from seemingly inexhaustible abundance to rarity in a few short decades. There is hope, since we were able to bring back from the brink the striper and we currently enjoy reasonably good fishing for stripers. However, biologists and fishermen do not agree on the security of the striper’s future; there are some who suggest we are poised for another crash. Whether it will come, and how we will react, is unclear.
The potential threats to current striper populations are many and varied. Overfishing of the bass themselves may pose a threat, but the more dangerous threats, I think, are those that affect the stripers indirectly. These include factors such as the pollution of the and the problems this causes for the bass. Less obvious, to most, are the effects of overfishing the fish that stripers so depend on. The menhaden, or bunker as it’s called here in , is heavily utilized as a source of fish oil and protein. It is deeply and sadly ironic that these menhaden, which keep the Chesapeake Bay healthy by feeding on the plankton that can rob the waters of oxygen if allowed to go unchecked, are being harvested at unsustainable levels to provide protein for poultry feed. The irony comes from the fact that much of the nitrogen-rich waste produced by the poultry farms is allowed to wash back into the Chesapeake’s waters; this waste then contributes to the algae blooms that so choke the Bay, but now without the benefit of the menhaden to clean it up. The menhaden are there, of course, but now in the form of chicken shit. Ashes to ashes, dust to dust…it’s a cycle, to be sure, but one so out of line with the one we should be encouraging that it’s hard to think about.


My recent thoughts on the fascination with anadromy, and with cycles, were inspired by a relative of the menhaden, the so-called “river herring”. River herring in are actually two species, the blueback herring and the alewife, so closely related evolutionarily that they are also virtually indistinguishable morphologically. Although they can be distinguished with some error based on measurements of body depth and eye size, the only sure-fire way to identify them requires dissection. The spring herring run in is of great significance to the striper fishermen, and for good reason, for the herring can make up more than a third of the diet of stripers in the spring time. This means, of course, that where one finds herring one may find stripers, and because herring are fairly large baitfish, fishing for bass during the herring run is also a great way to increase one’s chances at catching large striped bass.


If you’re a striper fisherman, as I am, take a look at these herring the next time you’re lucky enough to see them. And consider that these beautiful little fish have made their way up these rivers, against all odds, to spawn, for millions of years. Think about that. These diminutive, silvery rainbows, each one just a year or two old, are part of a cycle that is millions of years old. Say it to yourself a few times to let it sink in: a cycle that is millions of years old.
And now, consider the fact that river herring populations in many of the rivers of the east coast, from , through , and on down to the , have declined in some cases by up to 99.9%. What does a decline like this look like? Well, in 1985 some 630,000 herring were counted passing through the Holyoke Dam on the . Twenty-one years later, in 2006, only twenty-one herring were counted. Read that again: not twenty-one thousand herring, just twenty-one individual fish. You could put every last one of them in your bathtub. The decline was more dramatic on the St. Croix river that runs through parts of and ; here the run declined from over 2,600,000 fish in 1987 to only twenty-two fish in 2005. According to the Herring Alliance, these frightening declines cannot be explained entirely as a result of habitat degradation resulting from factors such as dam construction because large herring runs have occurred for quite some time in conjunction with dams. Instead, according to the Herring Alliance, these declines are likely due to recent and dramatic increases in the trawler harvest of river herring. The river herring themselves may not be the primary target of these trawlers, which instead are after Atlantic herring, but the river herring are captured in large numbers as by-catch.
If the river herring crash completely, what will happen? Given their importance to the striped bass, the potential fall-out from a herring crash is a frightening thing to consider. Could the stripers survive on other food sources? Perhaps. (On menhaden alone? Maybe…but recall, the menhaden are being severely overfished as well.) But one thing is certain. If the cycle of the river herring ceases to be, something is lost that more than just a small silvery fish. A cycle will be lost, and if, as I suspect, a part of the human soul is a fascination with cycles, then with the end of each cycle comes the gradual decay of the human soul. At some point, whether it be a fish population or a human soul, decay is irreversible.
Posted by English Jonny at 9:38 AM 1 comment: 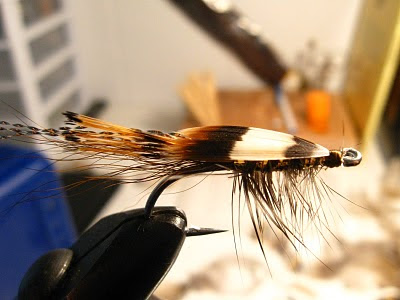 Last spring I was fishing a coastal inlet close to home and there were large striped bass right in front of me gorging on great blooms of grass shrimp. Somewhat comically, but quite 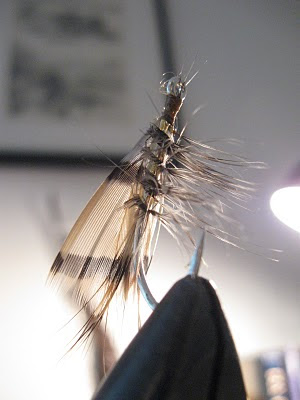 beautifully, the bass actually make a "popping" sound as they hoover the crustaceans from the surface. I'd never heard this before. It was really cool. But we couldn't catch a single fish.

My friend Andrew is a very good fly tier and he made lots of innovative flies that looked for all the world like the bait being consumed. So when I decided to start fly tying recently after 25 years of fly fishing (don't ask, I just don't know why it took me this long), it was because of these shrimp and the sound of the popping stripers.

Andrew has thrown a huge amount of feathers and fur my way, and one bag contained some beautiful feather tips fusing gold, orange and gray. They were from an unidentified game bird shot by his father, I think. They looked shrimpy and today I wound them to a hook together with some grizzly hackle and gold ribbing. I'll see what the bass think in a few short weeks. If they like the fly, Andrew can give it a name.