The Pitiful and Completely Uninspiring Story of Carl Henry


It’s understandable that Carl Henry would resent his older brother John.  Or, I should say, did resent him because of course, John has passed and has been forever immortalized in song and folklore.  It’s not that Carl didn’t love John.  He did, with all his heart, and for most of his childhood Carl wanted nothing more than to one day be a steel driver himself – just like John. But it’s hard for anybody to be a steel driving man, and it’s particularly hard if you’re small of stature and born with  slightly asymmetrical arms.  It throws off your timing, I guess.

But Carl was a good fly tier.  His flies weren’t fancy, but that didn’t matter because folks in Carl’s town didn’t want fancy flies.  They just wanted flies that would get the job done.  But more importantly, Carl’s flies were clean and he could tie them quickly.  Carl could crank out ten dozen flies and they would all be identical. If you’re a pro, that’s nothing to scoff at, and he made a passable living that way.  But still, nobody would let him forget that he was John Henry’s little brother.  It’s not that they were trying to shame him.  It was nothing like that.  It’s just that this is how folks treat those close to celebrity, when the celebrity isn’t available.

And so, the irony of what transpired in the fall of that fateful year was hardly lost on Carl Henry.  Word spread that there was, as they called it, a “whip finish tool”.  To Carl, this sounded as absurd as an “itch scratching tool”.  Could anything do this better than one’s own fingers? But it was impossible to ignore the talk.  Folks in town, but even outside of town (surrounding towns, too), were talking about the whip finish tool, and some said the tool would allow even a rank amateur to finish a fly faster than a man using just his hands.  Carl doubted this, but the truth is, he didn’t care.  Carl cared about little.  But it was inevitable that sooner or later, somebody was going to suggest a contest, and this is exactly what happened. 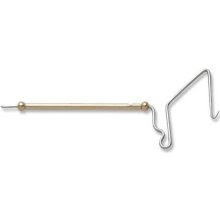 At first, Carl begged off.  He hemmed and hawed but the townsfolk were relentless. What else was there to do on a Saturday night? And so the night came and there was food and music and drink. Carl arrived on time, and saw that he’d be competing against Enos Pratt, the kid who tied flies for old man Clark’s hardware store. Enos was a good tier- Carl was the one who taught him, after all.  Frankly, Carl didn’t care if he won or lost, at least not at first.

But he got the drink in him. And he heard the whispers.  And by the time the gun fired and the tiers started, he did care.  But he didn’t care if he won or lost.  What he cared about was his own legacy, and he knew that if he couldn’t win this contest, he had only one alternative. No – even this wouldn’t do.  Winning wouldn’t be enough, because even his big brother John won, but it wasn’t his win that immortalized him. So Carl tied like he’d never tied before.  Sweat flew from Carl’s forehead, and he was at least six flies ahead of Enos Pratt, but still, he tied faster and faster.  Observers later said that Carl’s fingers moved so fast, they were just a blur of thread, feathers and, eventually, blood. The blood, as it turns out, was because in his haste, Carl had tossed a few whip finishes around his index finger.

But nobody, not even Carl, paid it any mind at the time. In fact, only one thing was on Carl’s mind and he muttered under his breath as he tied “Oh Lawd, please take me now.  Please take me now.”  It was, of course, Carl’s intent to tie himself to death. His only wish was that, at the very moment, his heart would explode and he would collapse, still six flies ahead.

In the end, however, Enos Pratt did catch up and when the postman, who had been selected to stop the clock because he was the only sober person among them, finally rang the bell, Enos Pratt had tied one more fly than had Carl Henry.  And Carl Henry, much to his chagrin, was alive and well.

But not quite.  Because in his efforts to tie himself to death, he had chosen Kevlar tying thread, the strongest thread known.  And, as I said earlier, he had inadvertently tied several whip finishes around his index finger.  By the time Carl and the doctor realized what had happened, it was too late.  The finger turned gangrenous and within a month’s time, Carl was four fingered.  In the end, Carl could not tie flies with his hands…and could never master the whip finish tool.  He was dead three years later, found destitute and drunk in his shack.

This story has no moral, but it’s been clear to me for years that if I didn’t tell it, nobody would.
Posted by T.J. Brayshaw at 8:31 PM 9 comments:

Speyside Miniature in the Connecticut Highlands


When you drive north on Route 7, there's a point - probably just before the village of Kent - when you realize you're actually driving through a substantial floodplain. The hills either side take on the look of something approaching mountains and you haven't seen a strip mall in 10 miles. You're in the North-West CT "Highlands", and the ridge to your left is the Appalachian Trail as it clips Connecticut.  And yes, it feels a bit like you're in a small version of Speyside, and you'll just have to take my word for this.

It helps with homesickness to live in a place that feels familiar. And the fishing is familiar, especially on the Housatonic River, which is head and shoulders my favorite river in the area. The picture speaks for itself, but it also has the feel of a wild Scottish river. It's big, natural, difficult to wade, and there aren't many folk about. Of course, were it in Scotland, it's interesting to think that the Housie might contain large, silver Salmonids, cost $300 per day to fish and be bookable months in advance, instead of containing the numerous stocked trout (rainbow and brown) that Zakur and I had ready access to, and caught in profusion, yesterday. And not forgetting the lower reaches, where this large trout stream is a larger tidal river that does contain wild anadromes; it's just that they wear pinstripes.

The Housatonic is a solid 3 hour round trip from my home on the coast. Purely as a matter of record, that feels like a long way to go on the Sabbath. But the river had just been stocked, and I now conform to the blood lust chances of catching were good, and catch we did. At first, it was just me doing the catching, and this isn't terribly polite when you've gatecrashed a chap's Sunday quiet. But Zakur and I take it in turns at being good at fishing (and as I write this I realize this is another very good thing about the sport. "After you, no no, I insist, you first"). The last time Z and I fished this pool the boot was on t'other foot and I couldn't buy a strike. This time my "success" came of pure laziness, Steve having diligently rigged with nymphs under an indicator, me lacking patience for such apparatus and stumbling on the swung fly as the stockies' favorite. The difference between fish or none is often that simple.

After cookie cutter rainbow followed cookie cutter brown, we decided - as the discerning types we are - to switch to the dry fly. Also, fish had started to rise quite regularly to all manner of mayflies; grey ones, yellow ones, in size something or other. The catching slowed as we worked the rises that were furthest from us, because (a) we pretend we are targeting the most challenging fish, but mostly (b) casting is good, and (c) the fish in the distance are always bigger. At one point we were both playing fish and commented during the struggle that these felt like "better" ones.