It’s not particularly complex.  You wait until dark, and if it’s raining lightly or at least recently rained, so much the better.  It seems to me the best places are lawns with some open patches.  Too much grass is too much grass and too much dirt is too much dirt.  The nightcrawlers come out, looking to mate, and can be spotted glistening in the light of your flashlight.  The flashlight must be bright enough to see the worms, but a very bright one will put them down quickly. When I was good at this, I knew how to use the sweet spot of the flashlight’s glow to spot the worms, but to then use the glow’s periphery to keep the worm illuminated without alarming it.
What you do next, or rather how well you do it, is what determines if you’re a worm catcher or not.   Most nightcrawlers will not be completely out of their holes, and they can retreat surprisingly quickly once spooked.  It’s essential, therefore, that you grab them quickly and, if at all possible, grab them by the part closest to the hole.  Fortunately, they’re color-coded: the part of the worm that is darkly-colored is farthest from the hole.  So grab the pale end.  They will instantly attempt to retreat, and they’re slippery, so many will slip through your fingers. If you do get a good grip, you must apply a steady pull.  The reason you must apply a constant pull is that the worms have setae (small bristles) that they use to hold themselves tight to the hole.  Eventually, they tire and the setae relax. However, if you pull too hard you’ll break the worm in two.  This won’t affect the quality of the worm for fishing, of course, but broken worms are a sign of shoddy work.  Do your job and do it well.
Because the worms are here to mate, you will sometimes - and, under the right conditions, often – find mating pairs.  This is your chance to score a double.  Last night, I scored just one but, to my credit, it was the only double I saw.  I recall nights when I was younger where I got dozens of doubles in a single night.  There were a lot of things I could do multiple times in a night when I was younger.
I’m a bit rusty, and it’s harder for me to walk all hunched over, but by and large, I’ve still got it. In the end, I suspect I caught about 20 nightcrawlers.  Many were small to medium-sized.  The biggest ones are rare and hard to catch, as it should be.  They don’t get big by being easy to catch.  I missed a lot of real bruisers, but caught a few.  It’s true that I can buy a dozen worms from the local Wal-mart for about two dollars, but I’m glad I didn’t.  My lower back is killing me, but it’s the good kind of hurt.
Wednesday: Catch the fish.
I had high hopes.  But though the air temperature might be 78, it takes a while for the water to warm up, and I’m not a very good early-season smallmouth bass fisherman.  It turns out, though, that I’m pretty good at catching striped shiners.  I managed to pull four or five of these out of one spot using nightcrawlers, and then later got three more on small marabou jigs drifted under a bobber.  Unfortunately these fish are unremarkable in all ways.
Eventually, I managed to take this single small bass from a favorite spot just as I was about to give up. 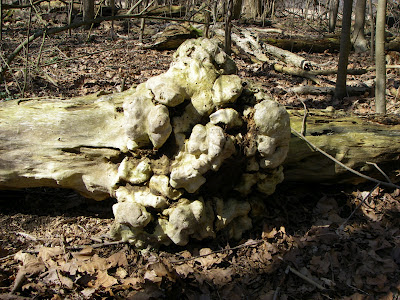 Moderately satisfied, I decided to end the day and head home for a cold beer but not before walking a recently scoured gravel bed for arrowheads.  I came up short here, too, but instead scored this very nice trilobite fossil, the only one I’ve ever found. I sent the photo to a trilobite expert I knew during school, and he thinks he might be from the family Dalmanitidae.  It’s probably about 400,000,000 to 450,000,000 years old, give or take a few.  This makes it more remarkable, in many ways, than a mess of striped shiners.
Posted by T.J. Brayshaw at 8:44 AM