In Open Praise of Russell Chatham

If you've read anything on here, you know that "literary critic" was not what I was put on Earth to be. I'd like to leave that to Brayshaw and select other friends who are good writers, but they're just not prolific enough. Anyway, I don't pay much heed to what critics say. They're all at it, after all. But (yep, there she is), I need to get this next post off my chest. Afterward, I promise I'll try to play nice, as the grammatically awkward saying goes.

What follows is a correspondence following the 1976 (Vol 1, Issue 6) Water Fowl Edition of Gray's Sporting Journal, in which appeared a Russell Chatham story called The Great Duck Misunderstanding. I hope by putting it here I do mild justice to the Journal's original tenor, and pray that I don't come across as a Chatham groupie. Given the next paragraph, the fact that I adore Chatham's writing, named this Blog after one of his books (credit: Brayshaw), and plot daily to divert my progeny's college fund that I may afford but one of his lithographs, I doubt I shall succeed in the latter.

These two letters capture my only true bias in the realm of field sports: that to be narrow, stuffy, closed minded is to deny the reality, the fun, the experience of it all. The response below envisions a sport best enjoyed in the context of whatever else we do, providing wholesome development only where counter-weight exists. It tells of why the pervading market (in '77 as now) for how-to-do-it writing is to opt for journalism over literature (Note: one of these is better than the other). It even has a note on conservation, of striped bass in this case. More, it says something to me about the importance of nurturing excitement in reality rather than keeping the real stuff, the fun stuff (and yes, the cussin) hidden under wraps. Wider implications here, right? In this aspect it is even more relevant today than it was in 1977, and again I hope this isn't off-message to what the author intended.

Many of the invisible people that I pretend to write this to will have read Chatham's book Dark Waters, which contains the story that so shocked some of Gray's readership. Brayshaw gave me the book, so you know who to credit or blame, depending on your point of view. Again remarkably, the book isn't really about fishing and on the face of it, the story, as its title suggests, revolves around cooking duck to perfection, the emotions of grease, wine and men.

I did tell you I'm no critic. But at least now I can play nicely. 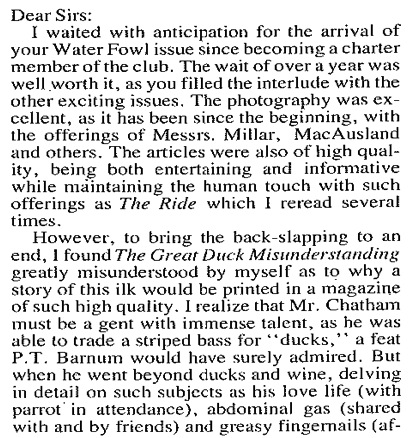 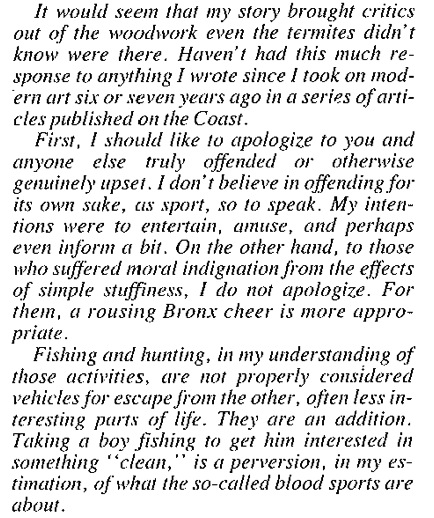 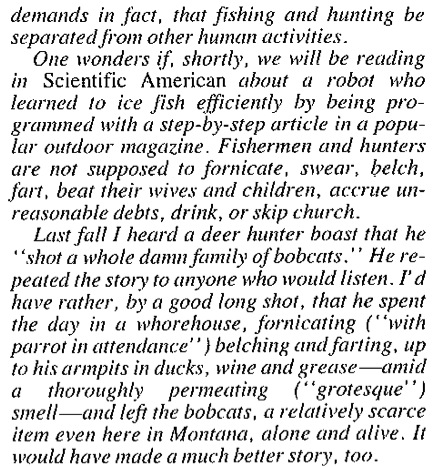 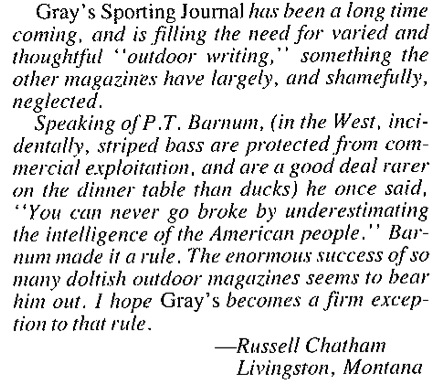