The coming of fall is always bittersweet, since it means the close of much of the best fishing of the year.  But fall is also when we here at The Culvert review products, just in time for your holiday shopping! Stay tuned for unbiased reviews on the latest and greatest products to hit the shelves in 2011, and get a jump on 2012.  We don't sugarcoat anything here at The Culvert, least of all our reviews.  In fact, while we haven't yet decided what products to review, we've already written the unbiased review itself, and as soon as the products start rolling into the central office, we'll be on the water testing 'em !  Read on...

We all have one - that favorite hat, or pair of slippers - that thing which is perfect, and made so because it has grown with us, over time.  So much so, in fact, that it's hard to say where we stop, and it begins. The problem, of course, is that these things never start that way.  That kind of perfect comes only with time…or does it? Had you told us that the wait was over, we wouldn't have believed it, until now.  But it's true, and it's our hope that you won't just take our word for it.  Until then, our word will have to suffice.

Perhaps on occasion, somebody pulls a fast one on English Jonny.  Sometimes ol' Brayshaw gets bamboozled.  But it's a rare product, indeed, that can impress us both.  But with ________________ we have both found our "perfect pair of slippers", and despite our differing shoes sizes, we both agreed that ________________ "fit" perfectly, right from the start.

During a recent Executive Council meeting, the staff discussed the nature of The Angler's Culvert (hereafter referred to as T.A.C., or sometimes simply TAC, or sometimes just The Culvert, or sometimes just "this place", or "here"), how far we'd come, and where we hope to be a few days or even weeks into the future. With barely concealed howls of laughter, we lauded ourselves on our efforts, and successes, at presenting largely "original content", something we feel is largely lacking in the fly fishing sphere of blogs (hereafter referred to as "the blogosphere").

Now, having despite all that, I'd like to point our readers to an important study, published some time ago by somebody else, but that never received the important attention it deserved. We, here, have used the results of the study in our own efforts to tailor this place, but it's important reading for anybody who cares about fly fishing, its future, and, dare I say, our future as human beings. Yes, it's that important.

Although we here at the Culvert like to have fun now and again, we're not philistines. Please join us for a special installment of "English Jonny Reads the Masters", our multi-part series on the great literature of fly fishing.
Posted by T.J. Brayshaw at 10:37 PM 26 comments: Links to this post

This is the last carp video of the season. I sat on this footage awhile, hoping something better would come along that I could add to it. Never did, so here it is.
Posted by T.J. Brayshaw at 2:07 PM 2 comments: Links to this post 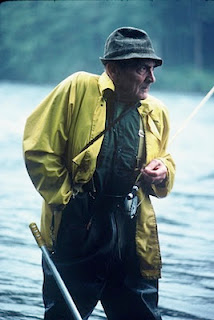 Russell Chatham said somewhere that Roderick Haig-Brown ought to be required reading for all students.  I was reminded of this recently when I came across this passage from his book "A River Never Sleeps", first published over 60 years ago: 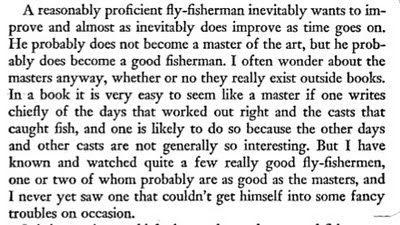 Dave came into the Edinburgh Safeway super market where I worked as a 16 year-old shelf stacker.  Unmistakable in Tweed cap, Tweed plus-twos, muddy wellingtons and a beaten-up old fake Barbour jacket, I thought he might be an angler (I’d already been bitten by that bug). We got talking and he told me he was a “shooting man”, and I didn’t know what that was until weeks later I was walking in line through a turnip field in Kinross-shire with good friends Graeme and Grant. I remember our first day perfectly: we were next to the “D Wood” on the border of Hilton of Aldie Farm and Parks of Aldie estate, tracts of rolling arable farmland that sit within a perennially damp patch in the Loch Leven basin, Kinross, Scotland. Staying in line and trying to mimic the alien cries of the pheasant beater, I remember Dave’s brown and white springer spaniel, Scamp – the most disobedient of his family of dogs, ferrets and Lord knows what else - as he pushed a huge cock pheasant into the air. And then what seemed like a lifetime as David patiently let the bird reach sporting distance before the first barrel of his old 12 bore pigeon gun brought it crumpling down, stone dead. This was my first experience of shooting – my first close quarters with a pheasant and a dog working cover; the first impressive discharge of a shotgun’s delayed blast - and it bit me hard. It was the beginning of my friendship with Dave Watson.

Everything about Dave was shooting, and everything else just had to fit round it. A wife or family were out of the question. You couldn’t sit down in Dave’s house without gaining a coating of dog hair. Ducks, pheasants, pigeon, snipe, grouse all hung to season in the coat cupboard. Pheasant pictures adorned coasters, blinds, cushions. Shooting party photographs looked down from the mantle; ferrets sat next to dogs on the living room floor; the shotgun always dismantled and drying next to the three-bar fire. Dave would sit there in rare downtime, occasionally breaking less interesting conversation to swing an invisible gun at an invisible bird on his living room ceiling - “co-cock, co-cock…over!!!” The place smelled liked a hunting lodge. I know this because I used to go to Dave’s on lunch-break from the store. He’d always make game soup or wild mallard sandwiches lathered in butter. Dave even ate shooting.

I don’t think I stopped going to Aldie with Dave for the next 15 years. I bought a shot gun and for a time shooting even surpassed my passion for fly fishing. We’d hunt rabbits in the summer, either walking in line over the moorland on the lower part of the estate, or using Albert and Daphne, his ferrets, to bolt rabbits from their holes (we lost Albert one night. He’d cornered a rabbit underground and died of a happy surfeit of best Scottish bunny).  It was a great way to learn gun safety and how to hit a tricky target. Later in the year we’d focus on the main game – pheasants and gray partridge - and this we did either with just the two of us (Scamp was later replaced by black and white springer, Don), or with a group of 6 or 7 guns in the true rough-shoot style. Our bags were typically made of a few pheasants that Dave would spend off-hours drawing in from surrounding estates with his continuous feeding regime; and to that we’d add a partridge, a few duck from the stream bordering the estate (and in which I once released too many shots at a large trout before being the subject of much ribbing (“were ya trying to cut the wee thing intae steaks??”), a woodcock, snipe, some wood pigeon and ground game – more rabbits and brown hares. These were great autumnal occasions, as much about social lunchtimes in the barn as anything else.  Dave would always produce a picnic hamper – it was cherry or apricot brandy all round. The afternoon beats were always more leisurely affairs.

At night we’d flight duck, usually into the Aldie farm pond, which again Dave would feed diligently with barley. He'd planted conifer saplings around the perimeter as cover, and today they're 25' tall. I’ll never forget the soft sound of wing beats and the rigid anticipation of birds circling overhead. On still, moonlit nights they’d pass nervously for long periods; us tucked down in undergrowth with breaths held and no smoking. A stormy night was best to bring the ducks fearlessly in, but eventually they’d descend into the bright fire from our guns, and if we’d done our job a mallard or teal would splash down into the pond sending the dog to work. I never tasted better meat than roasted wild mallard.

I was invited to many posh shoots all over Scotland because of Dave. I shot red grouse in the Pentland Hills; pheasants at Hopetown House. I missed pheasants at some of the very finest sporting estates, but Dave and his crowd were only ever encouraging, and he continued to give me the best stands throughout his time as gamekeeper on the neighboring Parks of Aldie shoots. Some days we’d make fine bags of 50 brace of pheasants and other assorted game, but Dave rarely picked up a gun himself. For the most part he did all of this, his life’s passion, to see his friends enjoying good sport. (When he did shoot, we knew he was the best of the group. I could try for the rest of my given days, but I’m confident I’ll never bring down a left and right at tiny, zig-zagging snipe on a bleak, wild moorland gloaming. I’m just glad I got to see it.)

It was the casual days I enjoyed most. We’d plant trees for cover or release pheasant poults in pens we’d made. The Laird always played down our chances on a shooting day: “it’s just a walk. A piss-about day”, he’d say. This meant standing in woodland for the evening pigeon roost, or shooting the same birds over decoys in a crop field. Building hides and shooting snowballs when nothing came. In other slow times we’d trap carrion “hoody” crows or shoot a fox - once I saw Dave imitate an injured rabbit (put your mouth to the back of your hand and suck) to lure a stoat from its hiding place towards our guns. Per tradition, such vermin would be impaled on barbed-wire fences around the farm, a sign to the farmer that we were earning our keep (and that others should keep away).  Dave was a gamekeeper first and last, always with a wink in his eye, but equally in demand as an after-dinner speaker to refined company.

I sold my shotgun a few years’ ago and somewhere over the Atlantic I lost touch with The Laird, safe in the knowledge I’d stand in line with my mentor again. Today I finally managed to track him down, only to learn that cancer claimed my friend in 2006, the year after I left Scotland for America. The boys went for a walk over Aldie to commemorate their great friend, and while I don’t know the bag, I’m sure Dave would have loved every minute of it.

He was my pal and I’ll miss him.

Posted by English Jonny at 10:47 PM 9 comments: Links to this post