House of Hardy vs. Carpio 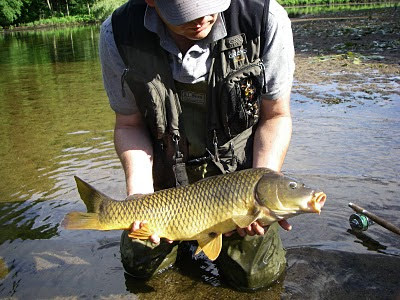 I was desperate to catch a carp on fly, but always doubted it could be done. For many years I knew of these fish. In England they're the quarry of course anglers, who pursue with dog biscuits and boilies. Fair enough, but why not a fly?

Andrew has been scouting a local river these past few seasons. He's done the hard work - which flies work; the best height of sun and water; length and type of leader; whether the 16oz or the 24oz can of corn offer best value; and perhaps most important,the varied habits of these fabled fish. [Note: I knew these fish were "old". I'd heard stories that monks introduced them in England. A quick search reveals that they found Europe from their Asian home over 8000 years ago. The Romans introduced them in some areas. They are a noble and historic species. That they're here in modern Connecticut is pretty cool.]

When we arrived dozens were ghosting around the stream; more gray than gold as their heavy-shouldered bodies silently drifted in a stream seemingly the wrong size for their sizable mass. The river was like England. Weeping trees; water lilies on sluggish water; bright sunshine. It was a beautiful scene.

Stealth and a knowledge of what the fish are doing are key. Fish moving quickly are worth a leading cast ("Connecticut Bone fish" is apt), but those more sedentary, yellow lips betraying breakfast time, were the ones worth more attention. For some time we had more of the former, but some feeders came into view within easy casting distance and after a few suspicious inhalations of the fly (a Woolly Bugger of AMS's tying - perfect in weight and visibility) I saw a fish turn and confidently take. A larger specimen from the group, my new Hardy's Traditional 4 weight buckled unnervingly under the heavy strain of the carp's initial short bursts, but finally subdued she came to rest on a convenient sandy bank.

A beautiful creature; vivid yellows, golds and oranges with a thick gray head and shoulders. My first carp to a fly, and I was ecstatic. 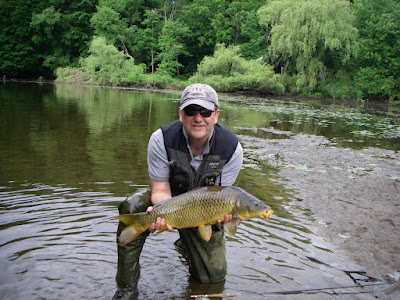 House of Hardy won today. An English rod, Asian fish, angled by a Brit in the heart of Connecticut. I can't help but delight in these rich dynamics. Another wondrous fish to hunt for as long as my legs can wade in water.

Here's the one that got away. I knew the 8lb fluorocarbon was frayed (its principal flaw) but I fished on regardless. Still; it made me cackle, and this is always the best bit. --JA

Posted by English Jonny at 9:36 PM