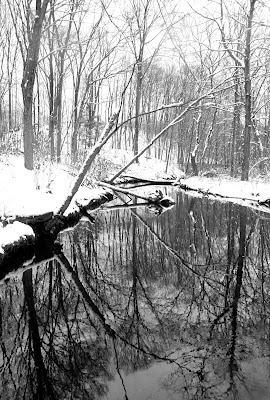 I was a guest on a trout stream today. Early meet, we drove north to the river, which is "within 100 miles of the northern CT border. Not saying which side". I learned how to fish a small stream all over a

gain. I do this every year. Roll casting. Contorted side casting. Houdini casting. We didn't catch fish for a while. Then we started to get them. I only lost one fly, which is something. But enough about the fish. Anglers are very lucky people. We get to wade around in rivers, and sometimes it's just all about rivers. Dark, undercut banks; popply riffles; deep holes; twists and turns; cascades; waterfalls!; overhanging trees of every type (just how do rivers contrive to be so darned pretty?) Fresh, undisturbed snow. Not another soul.

The shape and dynamic of this stream is beyond my limited abilities for the descriptive word. If I could paint I'd show you. But I did see it with my own eyes: so I'm definitely not lying. I was a kid all over again. 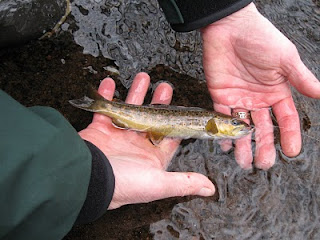 The river gave up its three species of trout: brown, brook, rainbow. They liked a Bead-head Prince Nymph, which is well known to American anglers, but a new one on me. 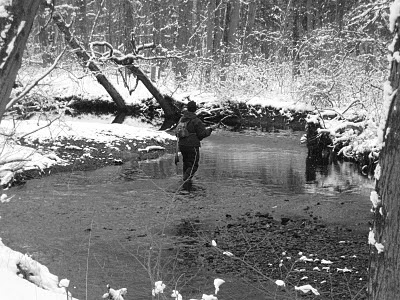 The better pictures here were taken by my host. I'll call him Tidal to preserve his modesty, but you'll find him and his work here. He's been visiting this river since early childhood and knows it like he knows the rooms in his own house. Today was sheer pleasure, and I'm grateful to him for that.